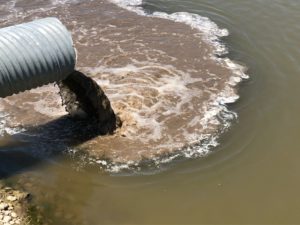 The Pintail Ranch straddles the Boise River near the Highway 95 bridge by Parma, ID. Doug Bates bought the the beautiful property, in part, to create and improve wildlife habitat on the ranch. Little did he know what was happening on his ranch was harming the fish and wildlife that live in the Boise River. Being a man with a strong stewardship ethic, Mr. Bates has decided to tackle this problem. He’s beginning a phased conversion to a new irrigation system that will prevent tons of sediment from entering the Boise River each year.

Corn is the primary crop at the 1,000-acre ranch, but there are large sections of ground kept in pasture and grazed by cattle.  The row crop land has been irrigated for decades by either pumping or gravity feeding water from the Boise River down long corrugates after which the excess water returns to the river.  Water is delivered to the pastures in the same manner, but the water spreads across the pasture and then returns to the river. 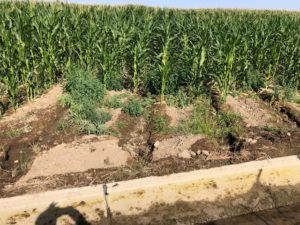 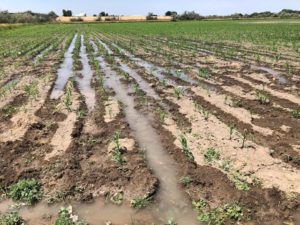 This method of irrigation tends to be inefficient, requiring more water to be delivered than the plants can use. This is because fields aren’t flat and additional water has to be dispersed over the ground to irrigate the high spots. As the water flows through the fields it collects sediment, pesticides, chemicals, fertilizer, and phosphates and carries these substances into the Boise River. The moving water also erodes the river bank and field bottoms.   Slag pools form at the bottom of the fields and the cattle tend to wallow there. Cattle actively graze irrigated pastures, also.  Contaminants from cattle excrement are carried to the river in the irrigation run off.

The Pintail Ranch has summer irrigation water rights of approximately 46 cubic feet per second. This equates to the delivery of several million gallons of return water (accompanied by chemicals, fertilizers, and sediment) to the Boise River every 24 hours when the ranch is in full summer irrigation mode.

Mr. Bates is installing pivot sprinkler irrigation on four fields totaling 162.5 acres.  Pivots are more efficient and can irrigate the same acres with less water than needed in traditional flood and ditch irrigation.  Field runoff is nearly eliminated, and chemicals, sediments, and fertilizers stay on the ground promoting crop growth instead of being dumped into the river.  As a result, tons of sediment, along with with phosphorus and other pollutants from these fields will no longer enter the Boise River each year. 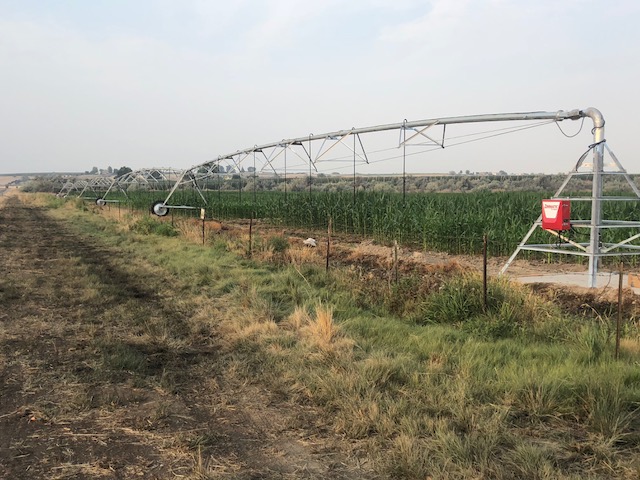 The challenge with pivots should be no surprise; they are very expensive.  Mr. Bates received assistance from the Natural Resources Conservation Service and Canyon Soil and Water Conservation District in Caldwell to design the new irrigation system.  In July, the Lower Boise Watershed Council and Canyon Soil and Water Conservation District awarded Pintail Ranch 50% of the project cost, $187,500, from the 2018 State Agricultural BMP Implementation fund.  Phases 1 and 2 have started and are expected to be completed in the spring of 2019.

Mr. Bates said, “Although expensive, we think using pivots instead of ditch and flood watering methodologies is an elegant solution for irrigation.  Pivot irrigation is more efficient in terms of water usage and farming overhead. Most important, we avoid excessive discharge of phosphates, sediment (erosion), and other chemicals into our primary river systems.  We also believe the habitat and wildlife benefit from pivot irrigation methodologies.”

Agricultural best management practices, including conversion to sprinkler irrigation, are recommended in the Boise River Enhancement Plan. Managing pollution on-site is the best way to improve water quality. Conversion from flood to sprinkler irrigation has been proven to be effective in reducing the movement of sediment and pollutants from the field to the river.

All photos provided by Doug Bates.