We met our fundraising goal!

We asked for your help, and you stepped up big time! Thanks to the generosity of you and your neighbors, the Plantation Island Greenbelt bridge and pathway will soon be restored.

Just last month we, the Idaho Foundation for Parks and Lands, spread the word that we needed your help to repair the Plantation Island bridge that had spanned the beloved Greenbelt. And you listened!

We shared that we had received partial funding for the repairs from the Federal Emergency Management Agency (FEMA). We called on you to help us raise the extra $75,000 needed to get us across the finish line. You did it! As of today we have raised the funds and are gearing up to get the bridge back in action! We could not have done it without you. Thank you!

Special thanks to Foundation for Ada and Canyon County Trail Systems, Linda Yanke, Don and Kay McCarter, and Citizens for an Open Greenbelt for their generous gifts, and to all of you in the community who gave gifts of all sizes! Thanks as well to all the individuals, businesses and organizations that helped spread the word. 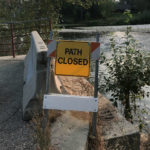 Have you asked yourself, “When in the heck is the Greenbelt over the Boise River near the Plantation Golf Course going to be fixed?” Well, you are not alone!

The Flood of 2017 Damages Greenbelt

The west bridge at Plantation Island was located on land owned by the Idaho Foundation for Parks and Lands (IFPL), a public benefit nonprofit corporation. During the high water in 2017, the City of Boise, Ada County and the Ada County Highway District paid for the removal of the bridge because the bank was eroding around the bridge abutments. The undamaged bridge was lifted off its abutments by a crane on April 3, 2017 and put down near the Western Idaho Fairgrounds, where it sits today. The bank loss and Greenbelt damage on Plantation Island from the extended record-breaking flow of the Boise River was extensive. 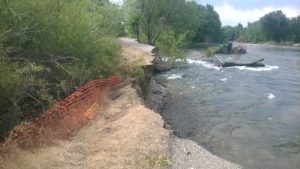 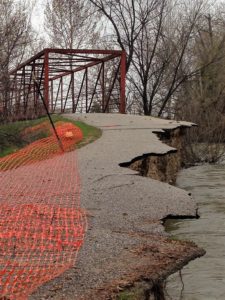 Governor Otter declared a flood emergency for Ada County that allowed IFPL to apply for funding from the Federal Emergency Management Agency (FEMA) to help with repair costs. Unfortunately, hurricanes and massive forest fires across the nation stretched FEMA resources thin, delaying funding approval for more than a year.

Finally, in late June 2018, IFPL received approval from FEMA for partial funding to make the necessary repairs and replace the the bridge. Hoorah! The total repair costs are estimated at $200,000 and FEMA has granted IFPL $120,000. IFPL must now raise at least $75,000.

Between now and October, IFPL is fundraising to secure the needed funds. Everyone is asked to pitch in to restore this important bridge between the south and north sides of the river.  Commuters use this route as do children going to school, people going to the fairgrounds, Hawks Stadium, Garden City Library, and many other destinations. Plantation Island is also a great place to birdwatch, walk your dog or go fishing. The Foundation aims to raise the money in the next few months so the work can be done when the Boise River is at low winter flow levels.

Help Idaho Foundation for Parks and Lands restore the beloved Plantation Island Greenbelt Bridge. Time is of the essence. Donate now. Thank you!