On Posted on May 16, 2017May 16, 2017 by Boise River Team to Boise River, City of Boise, High water, invasive weeds, Riparian Habitat, Volunteer

This year, 2017, the big news regarding the Boise River is the high flow.  And while that’s challenging news for some homeowners and we who recreate on the Greenbelt; there’s good news too.  The most desirable trees along the Greenbelt are the native Cottonwoods and Willows; both can withstand the flooding.  In fact, flooding and a bare seedbed is just what Cottonwoods need for regeneration. This regeneration has been missing on the Boise River where flows are now controlled by dams and reservoirs.

It’s also good news because some noxious and obnoxious weeds may be set back or killed by prolonged inundation.  An example, the Russian Olive is an invasive tree that has been reported to be controlled by flooding.  We shall see since there are hundreds of small Russian Olive trees in Marianne Williams Park and they are under water.

One noxious weed that may be controlled is Whitetop (also known as Hoary Cress), now in flower along the Greenbelt.  Noxious weeds are non-native invasive plants declared as noxious by the government because of their potential economic damage.  Whitetop displaces native plant species and reduces biodiversity, wildlife habitat and forage production.  It is poisonous to cattle.  Herbicides are only marginally effective on Whitetop; also, the roots go down many feet making pulling ineffective on established plants.

According to a Montana University Report, flooding can be a useful method for controlling Whitetop. Apparently successful flooding to control Whitetop requires continuous submersion from May until September in most cases.  In our case, some of our whitetop will be flooded from March through June or longer.  We can hope it works, but the bare ground that will be left behind will be an open invitation to seeds of both desirable and undesirable plants. 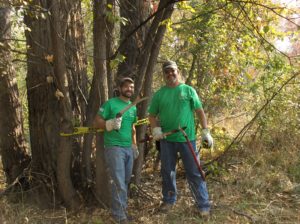 Citizen volunteers can play an important role in controlling invasive plants along the Boise River. While volunteers are limited in the controlling weeds on public land along the Greenbelt because we’re prohibited from using chainsaws or applying herbicides, we can help control some weeds by pulling or severing the taproot and preventing them from going to seed.  If the seeds are short lived in the soil, it should be possible to control some weeds in just a few years.  Poison Hemlock, Houndstongue, and Spotted Knapweed are three examples of noxious weeds found on the Greenbelt whose seeds survive for only about 3 years.

Other plants, including trees, can be controlled as seedlings, and plants like biennial thistles can easily be controlled by severing the taproot prior to blooming.  With a little knowledge of how to ID these plants and a knowledge of their growth characteristics, we should be able to make a significant difference in areas that have small populations of plants.

Control of Russian Olive and other established trees can be facilitated by public and private landowners by cutting the trees using chainsaws and immediately painting the stump with an appropriate herbicide.

Martha Brabec, Restoration Specialist for the City of Boise, is working on a plan to prioritize remediation efforts and provide information on plant identification and control methods.  She’s starting a program like Montgomery County’s Weed Warrior program. Participants will train on weed ID and removal with her in the field and in the classroom, and then are “certified” to complete tasks on their own. Weed warriors will log hours, weeds removed and locations using an on-line form, and will have monthly or bi-monthly group projects. I’d love to see you at the upcoming orientation.

Editor’s Note: Implementation of a comprehensive invasive and non-native weed control program is recommended in the Boise River Enhancement Plan. The cottonwood forest along the Boise River was historically vast and had an understory comprised of willow, alder, birch and rose; this has been compromised by a mix of non-native and invasive species, including false indigo (Amorpha fruticosa), several grasses, (e.g. reed canarygrass [Phalaris arundinacea]), poison hemlock (Conium maculatum), purple loosestrife (Lythrum salicaria), and various deciduous trees.  These species out-compete native plants and decrease the function and value of wetland and riparian habitat. The Boise River Enhancement Plan identifies the removal and management of these species as a priority action.