Each summer, the wildfire risks in the Boise Foothills rises to worrisome levels.  Our summers are hot and dry and the foothills have an abundance of fine fuels in the form of grass.  Due to these fine fuels, their continuity, and the steepness of the hills, wildfires can spread very rapidly and the lack of road access makes them difficult to fight.  As a result, wildfires tend to become quite large and pose risks to the Boise River watershed.  To better understand what is at stake, this blog will cover some basics on the drivers of fire behavior, fire effects, the subsequent risks to the watershed, and both past and present post-fire rehabilitation practices intended to address those postfire risks.

Typically wildfires spread uphill under the influence of topography, but winds that are strong enough can push fires across a hillside or even downhill.  Since hot air rises, winds in summer are usually uphill unless some other weather system, such as a dry cold front, creates winds in another direction.  The combination of wind direction and steep slopes mean that fires spread much faster uphill than down in the foothills.

Land managers can’t do anything about the weather or topography, which means the only thing they can try to affect is the fuels – the grasses, brush, and trees.  How dense or sparse the fuels and how they are arranged affect whether and how rapidly wildfires spread in the foothills.  The density of fine fuels – grasses in the foothills – is of most importance given how rapidly they dry out after a rain and how soon they cure out in summer.  Sparse fuels with lots of bare ground between the patches of fuel means that fires cannot spread very well.

The most problematic fuels in the foothills are the invasive annual grasses in the uplands, primarily cheatgrass and medusahead (Figure 1), and invasive shrubs or subshrubs in the riparian areas, such as Himalayan blackberry and dog rose (Figure 2).  Cheatgrass and medusahead form dense, continuous fine fuelbeds that cure early and allow for very rapid fire spread.  Medusahead dominates on soils with a high clay content while cheatgrass dominates on soils with a more loamy texture.  Himalayan blackberry and dog rose produce very long flame lengths that firefighters cannot get near.  If the average flame length exceeds four feet, the fire is too hot to work near and firefighters must back off some distance, which increases the amount of fireline they must build (length and width) and the risk that the fire spread rate will outpace the line building rate. 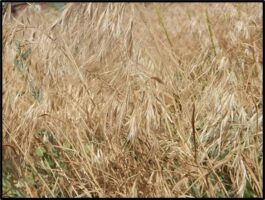 Figure 1.  Cheatgrass on the left, medusahead on the right 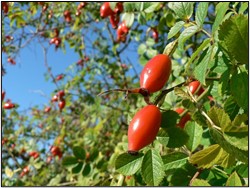 Figure 2.  Himalayan blackberry on the left, dog rose on the right.

The foothills also support several invasive forbs, such as rush skeletonweed and thistles (Figure 3).  However, these forbs do not present much of a fire risk due to their architecture – very open crowns with thin branches in the case of skeletonweed or main stems that are far apart in the case of thistles.  Because these forbs are often found within a matrix of annual grasses, fire can spread through areas with invasive forbs even though the forbs do not contribute to fire spread. 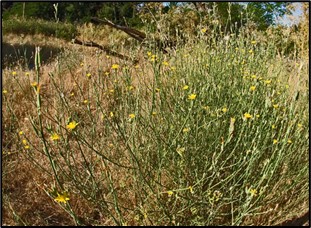 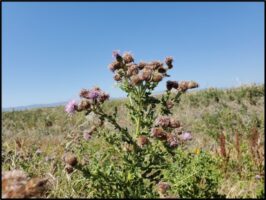 Figure 3.  Rush skeleton weed on the left, Canada thistle on the right.

The native shrubs and trees vary in their flammability, depending on age, density, and the amount of dead material they contain.  The upland shrubs contain volatile chemicals in their leaves and branches.  These chemicals help the shrubs survive drought but also increase flammability.  At lower elevations in the foothills, these are big sagebrush, antelope bitterbrush, and rabbitbrush.  At higher elevations near lower timberline, mountain mahogany and ceanothus species join the mix.  The native riparian shrubs (such as willows, Rocky Mountain maple, red osier dogwood, and woods rose) usually do not contribute significantly to fire spread unless they contain very high levels of dead material.  These species do not contain volatile chemicals.

Land ownership in the Foothills is quite complex with a mix of public and private land and several levels of government (federal, state, and local) own individual parcels of public land.  Land managers also tend to shy away from intensive fuels management in areas with high recreation use as such management can be controversial.  Where cheatgrass and medusahead dominate there are no currently effective or affordable methods to treat on the scale needed to significantly address the fire risks.  Fuels treatments in riparian areas tend to be very controversial and expensive so generally are not conducted.

Wildfires can have several impacts important to the Boise River and the foothill tributaries.  Probably the two most significant are the continued loss of native vegetation and increased risks of floods and mudflows.

Frequent and high severity fires favor the invasive species.  Frequent fires do not allow the native species to reach reproduction age or size.  High severity fires kill many of our native species.  The susceptibility of native grasses depends on where their buds are located.  Species like Idaho fescue have their buds located just above the soil surface while species like bluebunch wheatgrass have their buds located at the soil surface.  In addition, dead grass can accumulate in the crown of these grasses, promoting smoldering combustion that can kill the buds, causing the individual plant to die.  As a result, these species are susceptible to high severity fire.  The invasive annual grasses and many other invasive herbs, in contrast, don’t have buds and complete their life cycle before fire season really begins, avoiding damage from fire.  Since most wildfires in the foothills occur in July and August, even the seeds of these invasive grasses have largely been incorporated into the soil, which protects them from the fire.  The invasive shrubs resprout prolifically after fire.

Many invasive plants are ruderal species, which means they are highly adapted to disturbed sites.  Thus, even though species like rush skeletonweed do not promote fire, they benefit from fire, especially frequent fire where they have a competitive advantage.  In contrast, most of our native species are not well adapted to frequent fires.  Our native shrubs are slow-growing species, requiring several decades without fire to achieve reproductive size and or dominance.  Big sagebrush does not resprout and its small hard seeds do not disperse far from the parent plant.  Antelope bitterbrush and mountain mahogany are poor resprouters, with resprouting depending on postfire soil moisture.  As a result, resprouting of these species is rare.  Rodent caches are the main source of new bitterbrush seedlings while mountain mahogany seeds are dispersed by wind and rodents.

Flash flooding and mudflows after a fire typically occur after a high intensity rainstorm before the burned area revegetates.  One such event occurred in 1959 following a human-caused 9000-acre fire on Shaw Mountain.  Mudflows down Cottonwood Creek, Picket Pin Creek, Warm Springs Gulch, Maynard Gulch, and other drainages dumped as much as 10 inches of mud on residences in Boise and into the Boise River.  At least 2 additional floods and mudflows followed that same year.  A video on YouTube – When the Pot Boiled Over – documents the fire, floods, and subsequent restoration efforts.

Given the extent of annual grasses, the steep slopes, and the increasingly warmer and drier summers, the probability of large wildfires is increasing.  Further, these fires tend to be high severity, removing all vegetation.  Invasive annual plants typically have shallow or limited root systems and cannot hold the soil as well as the deeper and more extensive root systems of the native plants.  The granitic soils of the Boise Foothills erode very easily when there is no vegetation to break the impact of raindrops and slow the movement of water over the surface.  Climate change is causing an increase in the likelihood of a high intensity rainstorm as well.  As the rainfall rate for an individual storm increases, more water runs over the surface instead of soaking into the soil, removing topsoil and creating or enlarging gullies.  As a result, the events documented in 1959 could happen again easily.

Once a large fire burns, stabilization of the burned area may be conducted to reduce erosion and rehabilitation may occur to restore a functioning ecosystem.  The practice of contour trenching seen in the video When the Pot Boiled Over is no longer conducted as that practice can cause as much or more damage than the fire.  Instead, current stabilization practices on steep slopes may consist of installing straw wattles across the slope, straw bales in draws, or straw mulch to limit the movement of soil.  One risk of using straw is the inadvertent addition of invasive plant seeds.  However, the goal is to provide a cover on the soil to limit raindrop impact and subsequent loosening and movement of the soil.

Seeding and planting is used as both a stabilization and rehabilitation method.  Drill seeding remains the most common method on gentler slopes, but cannot be used on steep slopes.  On steep slopes, hand seeding is rarely used on large fires due to the expense.  Instead, seeds are using broadcast from a helicopter or other aircraft.  In some cases, the seed may be incorporated into a mulch.

In When the Pot Boiled Over, most of the seed used was from nonnative perennial grasses, in large part because these species were widely available, competed effectively with the invasive annual grasses, and were more tolerant of grazing than most of our native species.  In 1959, livestock grazing was still a primary use in the Boise Foothills.  The current emphasis is to use locally sourced native species; however, native seed supplies are still limited so the use of non-native grasses continues.  Another change in seeding practices is to include forbs as well as grasses, preferably locally sourced native forbs, although the species available are limited.

For some examples of more recent post-fire rehabilitation in the Foothills, visit the open trails in the Table Rock area or areas along Highland Valley Road in the Boise River Wildlife Management Area.  After wildfires occur, you can sign up to help with Idaho Department of Fish and Game or other local conservation groups to assist in post-fire restoration efforts.