Editor’s Note: Not long ago news broke that The River Club (formerly the Plantation Golf Course) was considering leasing portions of an unnamed island managed by the Idaho Department of Lands for use as part of their golf course.  The island is in the Boise River just upstream from the Glenwood Bridge and consists entirely of floodway and floodplain.

According to the community-supported Boise River Enhancement Plan, protecting well-functioning floodplains provides multiple benefits to the river ecosystem. Protection is preferable to creation, restoration, or enhancement of impaired landscapes. To increase community knowledge, the Boise River Enhancement Network (BREN) will be sharing information about floodplains and the island starting with the bird habitat.

A study of the birds on the island hasn’t been conducted yet, so I went to the Cornell Lab of Ornithology’s bird observation database, known as eBird.  Birders report their sightings of species and numbers of each to eBird based on locations known as hotspots. I looked at two hotspots to learn what birds may use the island and when: the Boise River Greenbelt at Mile SW 5.2 and River Pointe Park.  River Pointe Park is just downstream of the Glenwood Bridge while Mile SW 5.2 is across from the island on the south side of the river by the RV Park.

The island is mostly wooded and dominated by mature trees. Examining the island over time using Google Earth time machine, I could see it has periodically been scoured by floodwaters. This natural activity has created sites favored by shrubs and smaller trees that provide habitat complexity that favors a high diversity of birds.  These floods have also slightly altered the shape of the island over time, mostly by eroding edges and creating and filling side channels across the island.

Approximately 100 species of birds may use the island over the course of the year.  22 of these species are either rare species that don’t normally occur in southwest Idaho or are species not commonly documented near the Boise River.  11 species are typically seen only during migration in spring or fall, 31 species are present only in winter, 15 are present only in summer, and 43 species are present year-round.  Up to 74 species may use the area in winter and 59 species in summer. Birders have not reported two species (great horned owl and house wren), but they are common along the forested sections of the greenbelt so probably occur in the area and use the island.

Large Trees Are Critical for Many Birds

Large trees are a rare occurrence in southwest Idaho which is dominated by shrub-steppe. The large trees along the Boise River are a magnet for many species of tree-using birds and native black cottonwood (Populus trichocarpa) are especially desired.  Native trees support more insects than non-native species.  During migration and breeding, insects are a critical food source to build fat reserves and promote the development of nestling and fledgling birds.  Mature trees also provide abundant cover and nest sites.  Large trees with decay pockets, whether alive or dead, are essential for cavity-nesting birds.  52 species documented in the area use trees to meet some portion of their needs – food, cover, perching, roosting, nesting, or a combination of these.

Many songbirds use the large trees for nesting, feeding or roosting.  Bullock’s orioles build their hanging nests in trees.  Brown creepers, chickadees, wrens, nuthatches, kinglets, and yellow-rumped warblers search the buds and bark of large trees for wintering insects.  Yellow-rumped warblers and western wood-pewees sally out from the trees for insects.  Patches of large trees are especially critical resting places for migrants allowing them to build fat reserves for the next leg of their journey.  Some, such as western tanagers and evening grosbeaks, stick around for several days to a few weeks before moving on.  Others, such as migrating warblers may be present for only a day or two before moving on. 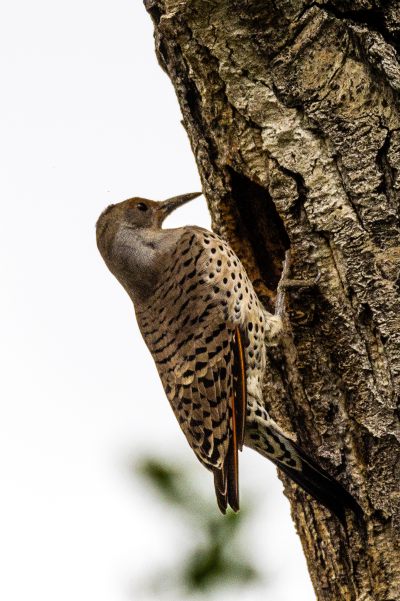 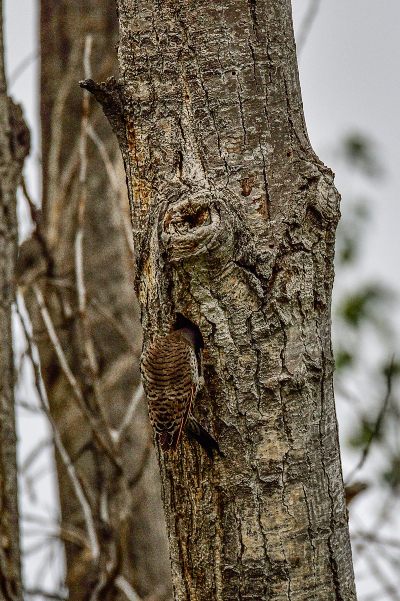 Northern flicker on a black cottonwood.  Photos by Ken Miracle

Large trees that lose big branches also create cavities that owls, American kestrels, and wood ducks may use.  In areas frequented by people, large dead and dying trees are cut down.  The lack of standing dead trees called snags are a significant factor in the decline of many cavity-nesting birds such as flickers and kestrels.  Floodplain areas without structures or high use like the island have many dead and dying trees that provide important and increasingly rare habitat.

Large trees also provide perch sites for predatory birds such as bald eagles, hawks, and belted kingfishers.  Eagles and hawks typically perch higher in the tree while kingfishers perch on low branches that overhang the river.

Rare birds are birds not typically found in the area and are usually present either as single birds or less than five birds.  The diversity of the island habitat and presence of other birds is attractive. Birders spot most of the rare species during migration or in the winter.  Glaucous gulls, blue jays, red-breasted mergansers, bushtits peregrine and prairie falcons and cackling geese have been documented near the island. The Anna’s hummingbird has also been documented. This pretty bird is usually present in summer or during migration, but increasing numbers appear to be wintering in the Treasure Valley.  However, the numbers of Anna’s hummingbirds remains small, making this a rare bird to be spotted on or near the island. Golden-crowned kinglets are often present in winter, but in much smaller numbers than ruby-crowned kinglets, so are rarely seen.

There are many species of birds found in the island area throughout the year.  They may be more visible or heard in some parts of the year than others, but they are present.  Birds such as Canada geese, mallards, hooded and common mergansers, American coots, and pied-billed grebes use the river itself, although Canada geese may graze on the island’s grasses.  Killdeer likely use the shore and may nest on more protected parts of the island.  Raptors that may hunt on the island include Cooper’s hawk, red-tailed hawk, great horned owl, and western screech owl.  Belted kingfishers perch on overhanging branches to fish the river.  Songbirds that are present range from black-capped chickadees to American robins to cedar waxwings to Bewick’s wrens.  Song sparrows can be heard singing most any time of year.  Interestingly, lesser goldfinches are seen more often than American goldfinches, although lesser goldfinches were a rare species as late as 1999.  Crows are seen more often than ravens, but both are present.

The 17 species present primarily in summer typically spend winters further south, arriving in the Boise area sometime in spring and departing by late summer or fall.  Many are insect-eaters and can’t survive the winters here.  These include western wood-pewee, warbling vireo, five species of swallows, Bullock’s oriole, yellow warbler, house wren, black-headed grosbeak, Say’s phoebe, and common nighthawk.  Tree swallows nest in tree cavities and may nest on the island.  Bullock’s orioles build their hanging nests in trees.  House wrens, warbling vireos, and yellow warblers are found in denser brush and clumps of small trees.  Say’s phoebes can be seen sallying out for insects from tall shrubs and low tree branches.

Summer raptors documented so far include turkey vulture, osprey, and Swainson’s hawks.  All three are migratory birds, spending their winters in warmer climates.  The Swainson’s hawk winters as far south as South America.  Osprey depend on fish for the majority of their diet.  In winter, the Boise River is at its shallowest and tends to get icy making fishing difficult for these large birds.

The number of bird species seen in winter is much higher than in summer due to the number of duck species that winter in the area and the number of higher elevation songbirds that migrate to lower elevations in the winter.  Wintering ducks documented so far include gadwall, American wigeon, northern pintail, ruddy duck, canvasback, ring-necked duck, common goldeneye, Barrow’s goldeneye, and bufflehead.  Common loons are also sometimes seen, and the groups of Canada geese may include a cackling goose or two.

The songbirds that winter on or near the island include brown creeper, ruby-crowned kinglet, spotted towhee, dark-eyed junco, white-crowned sparrow, and yellow-rumped warbler.  Less common wintering songbirds include hairy woodpeckers, Steller’s jay, mountain chickadee, golden-crowned kinglet, Pacific wren, Bohemian waxwing, and pine siskin.  Pine siskins are an irruptive species so when seen, typically are seen in large numbers.  Sharp-shinned hawks and merlin are wintering raptors.  The occasional herring gull can be spotted mixed in with the usual ring-billed and California gulls.

A few species of birds are present only during migration.  Snow geese mostly appear during spring migration.  They usually appear in flyovers of large flocks, announcing their presence with continuous honking. Chipping sparrows, great egrets, orange-crowned warblers, Wilson’s warblers, and western tanagers show up during both spring and fall migration.  Great egrets will show up on the river and island banks looking for fish and amphibians.  Chipping sparrows and western tanagers appear mostly in trees while the warblers usually show up in denser brush.

Some species haven’t been documented in the area yet but are likely present.  Black-chinned hummingbirds are a common hummer in the Treasure Valley during summer, while calliope and rufous hummingbirds may appear during migration.  Birders have seen green-winged and cinnamon teal elsewhere on the Boise River.  Other species of warblers could be present during migration. BREN encourages birders to frequent the area and report their findings on eBird to increase our understanding of the bird population.

List of all birds documented, their preferred food and typical nest site.

Learn more about birds of the Boise River by reading Louisa’s other blogs. Birds of Expo Idaho and the 4-part Birds of Middleton River Park