ACHD Invests to Protect the River 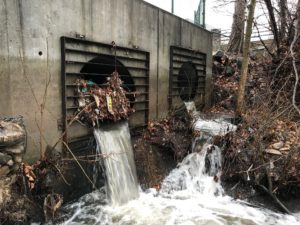 Unbeknownst to most harried commuters, Ada County Highway District (ACHD) is reducing pollution of the Boise River as part of many road improvement projects. ACHD is leading the valley in investment in roadway Green Stormwater Infrastructure (GSI), and new projects on State St. and Franklin Road demonstrate two different techniques. While ACHD has not permitted new discharges of stormwater to the Boise River for decades, stormwater from hundreds of miles of older roads travels through pipes to the Boise River carrying sediment, bacteria, nutrients, oil, grease, and heavy metals. Gross!

The Blooming of 15th and State St. 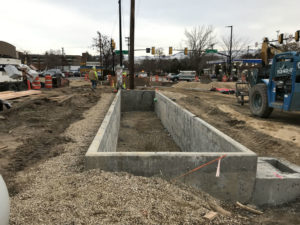 Bioretention planters were placed along the northwest, southeast, and southwest areas of the intersection of 15th and State St. in downtown Boise.  The planters will be backfilled with bioretention soil media (BSM), a nutrient-rich, permeable, engineered soil matrix comprised of sand, aged compost, and trace silt.  Plants selected for their ability to flourish in this unusual environment, including Joe Pye weed, Purple Maiden Grass, Culver’s root, ‘Black Adder’ Anise Hyssop, and Orange Coneflower, will be planted.

In a large storm event, approximately 6,100 gallons of stormwater will enter the planters instead of discharging to the Boise River untreated.  Additionally, the planters will beautify the intersection and offer habitat for invertebrates including important pollinators like native bees and butterflies. Bioretention planters can also be found on Royal Blvd. 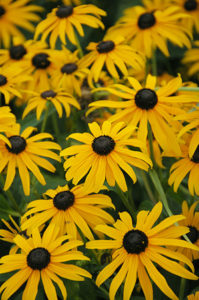 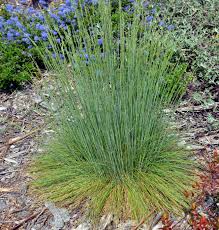 A different technique well suited for long stretches of rural roads is now in place on approximately .75 mile of Franklin Road between Black Cat Rd. and Ten Mile Rd. Bioretention swales were installed along both sides of Franklin Road and all four legs of the Franklin/Black Cat intersection.  The bioretention swales are filled with BSM and were seeded in December 2017 with a native seed mix that includes drought tolerant grasses and wildflowers including western yarrow, California poppy, Blanketflower, Lewis flax, Scarlet globemallow, Sideoats grama, Thickspike wheatgrass, Idaho fescue, Sheep fescue, and Sandberg bluegrass.

Bioretention swale on the north side of Franklin Rd. under construction.

The swales are sized to retain approximately 253,437 gallons of runoff in a large storm event.  Prior to installation of the swales, no stormwater system was in place along these sections of Franklin Rd. and Black Cat Rd., and runoff flowed overland into Purdam Gulch Drain or Kennedy Lateral then to Tenmile Creek and on to the Boise River.  Like the planters on State St., the Franklin Rd. project swales will help to retain and remove pollutants from runoff before it enters our surface water.

ACHD is an independent government entity that controls 2,100 miles of roads in Ada County. ACHD Commissioners are elected by region .